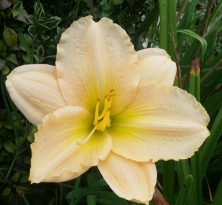 Some of my daylilies are repeat bloomers — they take a brief break during the heat of summer, then return in the Fall. 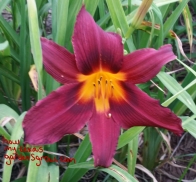 Theron is an heirloom daylily variety. Described as the first “red” , END_OF_DOCUMENT_TOKEN_TO_BE_REPLACED

Tiny insects are showing up on my plants — especially the potted daylilies that have been placed on the porch.  END_OF_DOCUMENT_TOKEN_TO_BE_REPLACED 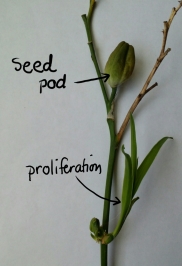 Daylilies can be propagated by “proliferations” (or by seed, or by division).

END_OF_DOCUMENT_TOKEN_TO_BE_REPLACED

Ways to get more Daylilies:  physical division of plants, seed production and proliferation shoots. Seed propagation is discussed in this post. END_OF_DOCUMENT_TOKEN_TO_BE_REPLACED 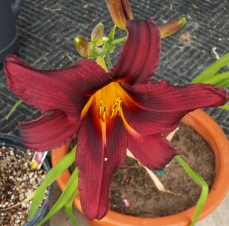 There are two “red” daylilies in my perennial gardens; one is ‘Prelude to Love’ and the other is ‘Theron’. I describe each of them as maroon–probably due to my Aggie lens! (We are both Texas A&M University former students).

Theron was the first “red” daylily—bred by Stout and released in 1934 (Dormant, blooms mid-May throught mid-June, no repeat) This was a pass along plant for my mother-in-law, and I acquired it from her about 8 years ago. I found it in a garden bed near the house, shaded from overgrown oak trees planted over 20 years earlier (but originally in full sun). Once carefully dug, I realized that there really wasn’t much time left because the tubers were tiny and there were only 3 of them. With care, I managed to bring it back to blooming and spreading.

Purchase in 1995, ‘Prelude to Love’ was one of the first daylilies I bought (that maroon lens again!).

This is a dormant, mid-June through July repeat bloomer.

Until this year, I thought that both of these were gone. They were discovered in unruly clumps of daylily tubers and roots—continued growing, but ceased blooming.

This year, they both have new locations in the improved raised bed. I expect to see a lot more of both of them from now on!

After preparing new bed space (Part 1), Here’s how I divided the daylilies, beginning with one Clump of Daylilies (see photo, left). this clump was dug with a hand spade; this clump has quite a bit of bermuda grass and weeds woven throughout the daylily roots–those can be removed as the clump is divided into single plants (also called “fans”).

Over time, grass, sedge, and other undesired plants will happily find a new home with  the daylily root system. Removing grass and weeds removes competition for nutrients and space in the soil. Before I divided the dayliles (and physically removed all obvious weeds and grass, several of my daylily varieties stopped blooming–I’ve recently discovered two varieties as they are now blooming. Do not underestimate the competition that grasses and weeds will inflict on daylilies. (There are also herbicides to remedy the bermuda grass and other weeds, just check with your local county extension agent to learn more about those chemical controls.) END_OF_DOCUMENT_TOKEN_TO_BE_REPLACED

By the time that I decided to divide my daylilies (early Spring, this year—recall the mess—), I realized that I could identify only two of the unruly clumps. So, the choice was made to start raised beds that would give me room to sort them by variety. Here’s how I did it:

1) the daylilies were dug up and clumps were placed in pots with potting soil—essentially I stored the clumps for future transplanting to the new beds (see pots in picture at the bottom of this post). END_OF_DOCUMENT_TOKEN_TO_BE_REPLACED

Last year was the conclusion of about a 3 year period where I failed to clean up weeds and grass in the perennial bed, and the end of about a 5 year period in which I did not divide the daylilies. As a consequence, the entire bed was a huge grassy mess (picture at left, from October, 2013) with extra large clumps of daylilies with fewer and fewer blooms each year. END_OF_DOCUMENT_TOKEN_TO_BE_REPLACED 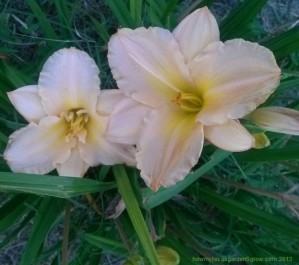 This daylily is the variety Fading Love, a faint peach colored, extended season bloomer with semi-evergreen foliage (although it performs as an evergreen in my garden — it doesn’t dieback to the ground, even after covered with ice) . END_OF_DOCUMENT_TOKEN_TO_BE_REPLACED