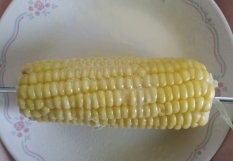 Our raised beds have us re-thinking planting schemes for the various veggies that we grow. In order to pollinate, Corn, for example, END_OF_DOCUMENT_TOKEN_TO_BE_REPLACED

Fresh sweet corn on the cob is hard to grow but well-worth the rewards.

We plant Ambrosia in both Spring and Fall. END_OF_DOCUMENT_TOKEN_TO_BE_REPLACED

Here is an example of  the effects of environment.

This year, we planted corn 10 days later than last year (it was cooler than usual this spring).

We planted about the same number of seeds, and most of the seeds germinated. Unfortunately, there were 3 frosts and light freezes from mid April until mid May. Some corn plants were damaged by the frost — despite being covered with hay mulch for protection.

On May 19, 2012, we harvested an abundance of corn (32 quart bags in the freezer!); however, on May 24, 2013, the corn was still at least 3 weeks from mature and fewer than half the plants survived. With heavy rains starting in late April, the grass has nearly taken  over. 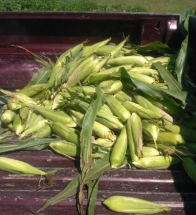