The Rose Mallow (also called Hardy Hibiscus) was planted about 5 years ago next to Belinda’s Dream — an old garden shrub rose.  (This picture was taken with a cell phone and all elements have a slightly bluer appearance than the real-world view.)

Belinda’s Dream produces blooms from Spring through Fall; the largest and most abundant blooms are in the spring, reduced number and size throughout summer, and a few more larger blooms in the Fall.

The Rose Mallow blooms last a single day; they unfurl in the morning, are fully open by mid afternoon then shrivel and drop in the evening.

Trim all roses on Valentine’s day (or the nearest Saturday following Valentine’s day–time permitting); Cut back all stems smaller than a pencil (average sized wooden pencil with lead) and cut just above a leaf bud location.

The rose mallow is self-sufficient, no trimming needed unless it becomes unruly (I don’t trim it because it will freeze down to the ground over winter). 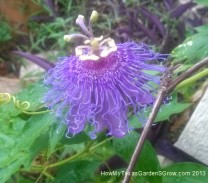 The passion vine grows in zones 7-10 and is a native plant in the United States. There are a number of colors, mine is purple but I’d love to find one of the reds!

This one was planted recently, a gift from my sister-in-law, JoAnn’s garden—her vine dies back in the winter (but not completely) and it is grown in partial shade. JoAnn found several seedlings near the mature vine, so it’s probably not a hybrid and I plan to try growing it from seed next Spring.

I’ve got this one growing near the house on the East side and so far it has defied the heat with about 2 feet of growth and 4 flowers so far–there were an additional 6 flower buds when I checked this morning. The Flowers last a day each, so it’s good to see additional buds.

I’ll keep watch on this one to share more growing tips.

This plant is a cypress vine (Ipomoea quamoclit) but is often called Star of Texas.

First, it grows quickly and can fill a large area in a matter of weeks, but freezes to the ground in the winter. So, it puts on a flashy eye-catching show in late summer (when most other things die back from consecutive days of temperatures 100 or greater.  I don’t like vines that take over and damage structures — something that easily happens in our mild winters! So this is an ideal vine to fill a trellis or fence—-without destroying.

The Star of Texas vine blooms profusely in the heat of summer. In fact, this vine will not even grow very well until the high temperatures are above 90 degrees and low temperatures are above 70 degrees. The blooms are about the size of a dime, can be found in pink, red or white, and behave like daylily flowers — open in the morning and last a single day.

Third, it is EASY to propagate! It returns year after year without much effort on my part and I have shared both seeds and small plants with friends and family.

I first started growing this vine from a few small plants given to me by my sister-in-law —– Debbie S. In fact, the plants can be pulled up and transplanted during the heat — just put them in a pot and keep them watered.

Finally—this vine gives a beautiful show up to the first freeze—so it’s blooms and green foliage can last well into October and, occasionally, November.

This daylily is the variety Fading Love, a faint peach colored, extended season bloomer with semi-evergreen foliage (although it performs as an evergreen in my garden — it doesn’t dieback to the ground, even after covered with ice) . END_OF_DOCUMENT_TOKEN_TO_BE_REPLACED

These peaches  came from two different trees The first two (left to right) were from one tree and the third one (far right) was from another tree. The first two peaches on the left are smaller and have small dark sunken spots, surrounded by yellow areas (see bottom picture for closeup). Both peach trees are the “Sweet Sue” variety and “Sweet Sue” is susceptible to bacterial infections. These spot were caused by a bacterial pathogen. The spots first appear as a round yellow areas that turn brown and collapse in the middle. As the disease progresses, the sunken areas merge. 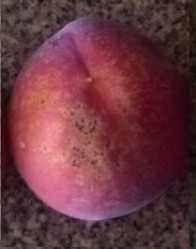 ?This peach (left) has minimal damage at this point so it can be washed –or the spotted area can be cut out–and the peach can be eaten. Crops that are organically grown (without chemicals) often have spots and blemishes (look next time you are in the produce section at a grocery store).

How do I prevent this damage from happening?

Damage over time ruins the peach.  The best way to control this disease is to buy bacterial spot-resistant peach varieties (that should be noted on the plant information label ). Plants do not have immune systems, like humans, and a genetic system geared to help the plant resist invasion by various pathogens is the best approximation. Unfortunately, as microbes are tested by resistant varieties, those microbes may be able to overcome the plant’s resistance to disease, and a new variety of plant is developed. (If this condition is worse next year, I  will probably look for a resistant peach variety to add to the garden–until then, I’ll enjoy these!)

NOTE:  This is an ongoing war in nature. (We see the same thing in humans when antibiotics are overused and “super bugs” emerge—like the antibiotic resistance staph infections that can become deadly.)

We have been picking figs this summer since July 7. The tree has —so far— yielded about 70 pounds of figs! Freezing is a great way to have figs all year. (We finished the last of the frozen figs from summer 2012 two weeks before we picked the first summer 2013 fig!).

Steps to freeze—- 1) rinse well with water (these are organically grown, no pesticides), 2) place on cookie sheet (see picture), 3) freeze at least 3 hours (I have left them on the cookie sheet overnight), and 4) put into bags for storage.

NOTE—we use vacuum-packed and sealed gallon bags, then open them and use a clip to keep the bag closed. Because the figs are frozen before packing, they will break apart easily and you can remove as many or as few as desired.

Rinse the frozen figs in a cup of warm water to soften them and they will have the texture of a Popsicle — a great treat for the hot summer months!

This double orange daylily was obtained from my mother-in-law’s yard. I have seen this double feature become available only recently in commercial greenhouses. END_OF_DOCUMENT_TOKEN_TO_BE_REPLACED

Spider lilies have a spider guest

My Spider lilies generally bloom when the high temperatures near 90 and low temperatures are about 70. For this area of Texas, that can happen anywhere from early April through June — this year has resulted in a later than usual bloom for my plants.

Closer inspection of the picture — area in red rectangle — reveals that the lilies have a spider guest. I just had to take this picture!

My landscape includes spider lilies near areas that are shady in the afternoon and evening. Those lilies that were growing in the less shady areas did not survive the drought over the last few years. These receive drip irrigation when the temperature rises and rains stop.

The last few days have been great — highs in the low 90’s and lows in the low to mid 70’s. We have been visited by a rather slow moving, light rain producing low pressure area trapped between two high pressure regions. Rain in July is rare!