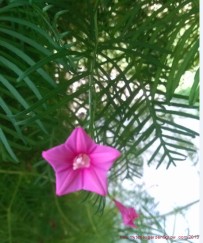 This plant is a cypress vine (Ipomoea quamoclit) but is often called Star of Texas.

First, it grows quickly and can fill a large area in a matter of weeks, but freezes to the ground in the winter. So, it puts on a flashy eye-catching show in late summer (when most other things die back from consecutive days of temperatures 100 or greater.  I don’t like vines that take over and damage structures — something that easily happens in our mild winters! So this is an ideal vine to fill a trellis or fence—-without destroying.

The Star of Texas vine blooms profusely in the heat of summer. In fact, this vine will not even grow very well until the high temperatures are above 90 degrees and low temperatures are above 70 degrees. The blooms are about the size of a dime, can be found in pink, red or white, and behave like daylily flowers — open in the morning and last a single day. 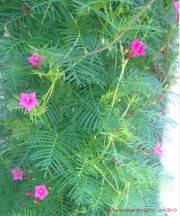 Third, it is EASY to propagate! It returns year after year without much effort on my part and I have shared both seeds and small plants with friends and family.

I first started growing this vine from a few small plants given to me by my sister-in-law —– Debbie S. In fact, the plants can be pulled up and transplanted during the heat — just put them in a pot and keep them watered.

Finally—this vine gives a beautiful show up to the first freeze—so it’s blooms and green foliage can last well into October and, occasionally, November.