My small ornamental garden by the patio — and visible from a window — has several plants growing now; ferns, annuals and evergreens. Four plants from my window garden by the patio are identified in this blog entry; 1) red salvia, 2) fern, 3) purple “wandering jew” plant and 4) unknown lily that appears and blooms after rain. 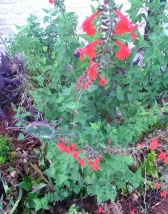 The red salvia is a perenial that returns without my intervention and each year, there are more plants! Each Spring, smaller plants sprout  from seed or from roots of previous plants.

Because of its easy care and awesome attraction for hummingbirds — I keep it where I can view the show of hummingbird colors from my window. I’ve seen hummingbirds fight for these flowers!

It is  very heat resistant, but I water it weekly for best blooming. The purple leaves and stems of Trandescantial pallida (second picture below) are visible on the left side of the salvia, in this picture.

The Holly fern thrives in the Spring until the temperatures are consistently above consistently above 90°. The higher temperatures burn the fronds and the dried material was removed prior to taking this picture. Although winter freezes and summer heat damage the fronds, fresh green foliage appears in spring, and again in late Summer and early Fall. Because of its consistent reappearance and new growth, the holly fern continues its residents among the other plants in the small garden.

More often, the holly fern just found growing in hanging baskets and parts located in the shade of a large porch. This fern is also grown as a houseplant in warmer temperatures (and I suspect, much colder temperatures).

This evergreen (or ever”purple”?) creeping plant readily repreduces from cuttings. In fact, the plant is rather fragile and breaks apart with little effort—a cat walking though the bed can occasionally snap a stem. Each time the stems break, a new plant is formed — it can root without any assistance, and thereby spreads rapidly in a tropical type environment. It will freeze back slightly each each, but completely refreshes over Spring.

I added this plant to my small window view-able garden about 10 years ago, and this year it has made quite an appearance.

In this picture, rain droplets are still visible on some leaves and the tiny pink flowers have appeared.

The unknown lily (right) is tiny (leaves are 4 inches to 8 inches long, and the beautiful pink blooms that appear after rain are about 4 inches across. this is a garden favorite that I forget about until after it rains and the lily appears. I’ve got this lily planted in 4 or 5 locations around the house. The entire lily dies back to the ground after the blooms appear — depending on the temperature because the plant stays around during cooler, moist time periods.

I do not know the identity of this Lily as it was given to me by a friend who received it from another friend and did not know the name either. At any rate, it is a great addition to my relatively “carefree” garden.

One thought on “Easy Care, Ornamentals for a Small Garden”

My Tweets
Follow The Art & Science of Gardening on WordPress.com
Join 33 other subscribers